In the past I have made my opinions on eBooks very clear, I’ve waxed lyrical about the virtues of bookmarksand my joy and delight in all things solid and real. This love for solidity and realism has made me realise something about which I didn’t bring up in my initial tirade against them, something which in essence is far removed from a simple personal preference, something which has slightly sinister overtones. The rise of the internet and the relentless march of technology and data which followed has made a profound impact on modern life, it has changed the very way we view the world. This change isn’t static either, it’s a change that continues to evolve and shape society. I’m just not entirely sure if it’s a good thing any more. 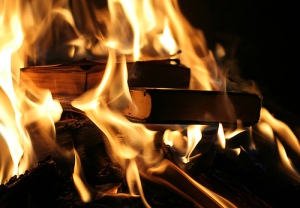 The internet has done wonders for making data freely available to the masses through sites such as that Wikipedia and the Google. Given a bit of time and effort pretty much anyone can find out about more or less anything. This is without question a good thing. Knowledge is power and should be freely available to everyone and their dog. eBooks have the potential to similarly open the world of literature to the everyone no longer do concerns of a book being out of print have to blight one person quest for knowledge and discovery. There is of course a but, and to me it’s a very big but (heh, big but.) It dawned on me that we might be diluting the very thing we wanted to make available to one and all. Anyone who’s spent any amount of time on the internet will have become familiar with the adage that “you should never believe anything you read on the internet” I tend to take more or less everything with a pinch fo salt these days. The problem is that a lot of the good information is being buried under waves of dross and torrents of bullshit. A world without editing or even the censorship of common sanity has really let the nut-jobs of the world go all out. If you don’t believe me just google “Time Cube”. Even wikipedia has its decriers and that’s supposed to be a good thing designed to help everyone.

Then there’s the matter of the medium itself. A book is a thing of reverence, the burning and destruction of a book is seen to be the mark of an evil and tyrannical regime, the realm of misguided fundamentalists and mad zealots. Were you to ask an average person if they’d burn a book they’d probably say no. If you pushed for an answer they’d probably grope vainly for an answer before giving up and just claiming that it was just “not done” or “plain wrong.” Which it is, the destruction of knowledge is in my books, (heh, puns) the greatest of imaginable sins. We respect books, there’s something almost spiritual in our treatment of them. Perhaps this is a throwback to a time when books, scrolls and writing were predominately used to enshrine the words of Gods, prophets and kings. Books have power.

But what about a website? Or an eBook? Would you have the same compunction over deleting or destroying one of those? Probably not, they’re just data. It’s debatable whether you can really even call them real, in the sense that a traditional book is real. Sure they’re there but it’s not quite the same. I’m concerned that this could gradually lead to the devaluing of the written word and knowledge itself, that one day people will blithely discard or destroy knowledge in a way we would find utterly abhorrent today.

Perhaps I’m just a closet Luddite, too mired in the world of the past, but this is the sort of thing I worry about, the sort of thing which keeps me up at night. Knowledge ultimately made humanity what it is today, without it we’d probably still be swinging from trees throwing our own shit at each other, it’s not something we should ever just take for granted. Be it fiction, non-fiction, fact or whimsy, words are important, words have power. Don’t fuck with words, they’re inside your head and know where you live.

A chemistry graduate consumed by the demons of apathy and disinterest. Likes tea and cheese. Sleeps less than he should. END_OF_DOCUMENT_TOKEN_TO_BE_REPLACED
This entry was posted on Monday, January 23rd, 2012 at 12:41 pm and tagged with Books, Devaluation, eBooks, Internet, Knowledge, Luddite, Technology, Words and posted in Ramblings. You can follow any responses to this entry through the RSS 2.0 feed.
« Things in the Post
The Reliquary »