I’m recharging my batteries at the moment. Now you’d think that would be what the weekend was for, and ordinarily you’d be right. But this weekend I took a small holiday and have subsequently taken today off. Primarily because any form of travel leaves me feeling drained, knackered, broken and decidedly inhuman. So today has become a compressed weekend in lieu of an actual weekend, a day where I do nothing except vigorously neck pint mugs filled with tea. As Elbert Hubbard said “No one needs a holiday more than the man who has just had one.”

The holiday in question was a flying visit to my old stomping grounds of Nottingham. It served a very important purpose. My body might be curled up in a small heap and groggily telling my brain to “fuck off” at the merest suggestion of movement, while recharging itself to a point where I can once again pass for human; but this holiday served to reboot my brain. Something I have been in sore need of doing. 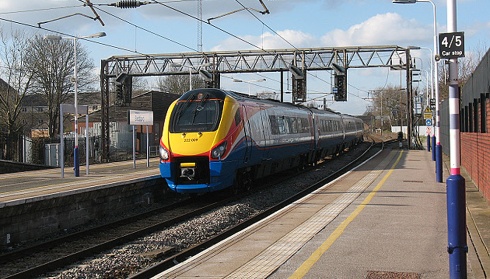 It’s not exactly the world’s biggest secret that I have not exactly been firing on all cylinders mentally, nor have I since at least before Christmas. My little holiday was about renewing my acquaintance with the small, elite cadre of societal monsters that I call friends; the few people I would trust not to stab me in the back should the shit ever hit the windmill. Well… not stab me in the back immediately at any rate. Friends are a rare and important resource often undervalued by too many of us. There are very few substitutes for people with which you can be yourself without fear of judgement or reprisal. people with whom you can happily laugh at double-entendres; revel in delight of being unceasingly childish and inappropriately sanguine; people whose company makes you examine all your problems and help you to just stop giving a fuck about them, if only for a little while. Our modern, hyper-connected world might make keeping in touch a lot easier, but no amount of facebook or twitter can really compare with the tonic immediacy of someone hugging you the minute they see you.

The journey home on Sunday evening was not without its thrills either. I was unfortunate enough to find myself sat in front of a particularly belligerent lady who refused to accept that saying you’ve bought a ticket is not entirely the same as actually having a ticket. So I had to endure the awkwardness of a series of conversations between her and the train manager who tried their best to explain things. All of the eventually coming to a head about half an hour into the journey to London whereupon she was asked to leave the train by a duo from the British Transport Police. Needless to say things escalated rapidly as the increasingly uncooperative lady refused to buy a ticket or vacate the train. Eventually the Constables were forced to stop trying to be reasonable and had the forcibly remove her from the train. “Forcibly remove” being the polite, technical term for “being dragged kicking and screaming well utterly unfounded threats of legal action against officers of the law.” As the dyed-in-the-wool Englishmen that I am I spent the entire exchange with a stopped head, desperately trying to force myself into the back of my chair and the psychological invisibility I felt it promised.; a more practical act than trying to wish yourself out of existence.

Though lacking when compared to action-film adrenal scuffling, I couldn’t help but be reminded of a thematically similar event from Indiana Jones.

A chemistry graduate consumed by the demons of apathy and disinterest. Likes tea and cheese. Sleeps less than he should. END_OF_DOCUMENT_TOKEN_TO_BE_REPLACED
This entry was posted on Monday, February 18th, 2013 at 4:36 pm and tagged with Awkward, Friends, Holiday, mental-health, No Ticket, Nottingham, Police, Recharging, Trains and posted in Ramblings. You can follow any responses to this entry through the RSS 2.0 feed.
« Treachery
Victory At Any Cost »