Out With the Old…

So this weekend was Queen Elizabeth II’s diamond Jubilee. Now that you’ve read this blog post’s title I can already sense some of you clenching your backsides. You’re thinking: “Oh fuck it’s going to be a massive rant against privilege and inequity. He’s going to bore us senseless with tirades about democracy and all those other republican wonders. Oh fuck, I’m not political, why am I here? I don’t want to read this.”  Well you needn’t worry. I slated this blog post for writing about a fortnight ago. The confluence of these two things is nothing more than a coincidence. I’m here to write about something else entirely.

I recently experienced a bit of a domestic tragedy. One of those little blips in life which makes you hiss through your teeth and mutter things along the lines of “fiddlesticks” or a plain and hearty “bollocks.” These domestic tragedies are not truly sad or terrible, but they get in the way of the smooth and straightforward operation of one’s meat-vessel within one’s functional life-scape. To cut a long story short, my mouse stopped working.

I got the mouse in question when I purchased my first computer. A computer I could finally call mine as opposed to simply filching off parents, schools or libraries. That was in 2005. A lot’s happened since then. I’ve finished a degree, nearly worked myself into a psychiatric institute, I’ve moved house three times, I’ve even grown a beard, shaved it off and grown another one. It served me faithfully for all those years. In that same time period I’ve gone through three keyboards, even the computer I bought alongside it has since been upgraded, cannibalised and discarded. But that mouse stayed true and stayed functional. But then one Saturday, just after lunch, it’s piercing red laser glow began to flicker, the cursor began to stick on the screen before its lights finally, and quite without ceremony, went out. A whimper not to dissimilar to a dying man clutching at his bedsheets pleading “Nurse? Nurse?!” 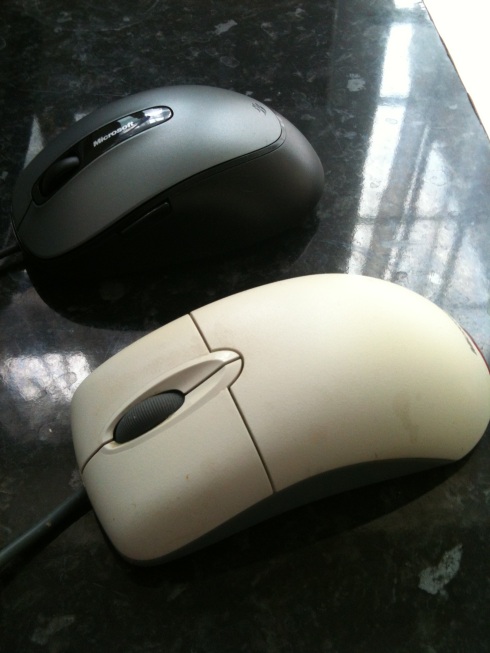 The old and the new

So off I went to the local PC World in search of a replacement. Whereas with my keyboard problems I could soldier on until a suitable replacement was procured from the nebulous realm of internet retail this was something that couldn’t wait. Although it is quite possible to navigate around a computer without a mouse it is a real pain to do so, everything takes so much longer. There was also the added problem that the day it finally died I had slated the afternoon for a marathon session of computerised space violence, which is something you really can’t do without a mouse. How else was I supposed to direct my anti-material death than with the clickity-click of a mouse?

I spent nearly fifteen minutes just trying to find the mice, wandering aimlessly through labyrinthine, shoulder-high aisles. When I finally did find them there was a remarkable lack of what I would call “sensible mice.” They were nearly all wireless, with need for batteries and charging and general faffing about. They were all contorted and sculpted like the arse of a robotic love-bot, with strange grooves and swells. Matt black rubber mixed with silvered plastic. That wasn’t what I wanted at all. I wanted a direct replacement of my trusty old friend. The device whose shape had become second nature, whose appearance was simple and workman-like, coloured in that reassuring creamy white plastic that descends into a dirty beige through use. But this was not to be. I was forced to compromise. I picked a mouse that was not too outlandish in appearance or price and yet seemed sturdy enough to take seven years of daily abuse. I had to accept that the world of mice as with so many other things in the world of technology, had moved on. The new mouse has two extra buttons for flitting forward or backward through browser pages, a mouse-wheel that tilts slightly left and right for horizontal scrolling. But perhaps most oddly of all, its optical lights are a bright and shinning sapphire blue, not the deep ruby red I had thought that all optical mice possessed. It’s going to take some getting used to. Its hindquarters swell in places that its predecessor’s did not, the main buttons make an entirely different sort of clicking sound and the mouse’s middle button requires so much more force to activate. On the upside the new mouse’s wheel doesn’t randomly decide to detect an upward or downward spin with a coquettish playfulness. But all good things must come to an end, you have to pick yourself and move on. Even if it means entering a strange and terrifying realm of unfamiliarity.

O brave new world, that has such mice in it.

Apple mice through the ages

A chemistry graduate consumed by the demons of apathy and disinterest. Likes tea and cheese. Sleeps less than he should. END_OF_DOCUMENT_TOKEN_TO_BE_REPLACED
This entry was posted on Monday, June 4th, 2012 at 5:46 pm and tagged with Computers, Domestic Tragedy, gadgets, Mice, Mouse, Ramblings and posted in Ramblings. You can follow any responses to this entry through the RSS 2.0 feed.
« June’s Pictonaut Challenge
Entirely Justified »