So June has finally arrived. Despite the fact that I’ve been operating on British Summer Time since late March, June is, in my distorted world view at least, the first proper month of summer. I was all ready to launch it a vicious and scathing attack on summer. On how it’s hot, sticky and generally uncomfortable. A tirade about how as nice as a bit of sunshine is, excessive amounts cause me to wilt into and exhausted and non-functional jelly. The sort of hellish weather I had to live through over the last few days. But then, at the dawning of June, the hot weather disappeared. It was replaced with a chill and pervading overcast drizzle. This was much more to my liking, but somewhat put-paid to any plans for my original rant. It longer seemed quite so topical. Although I’ve never particularly enjoyed experiencing the heat of the oppressive British summers of recent years I have always enjoyed the aesthetics of the summer. Perhaps it’s one of those lingering relics of a childhood growing up in the rural north. Summer was a time when the grass always looked greener than it ever did at other times of the year, the sky was always bluer, every colour just seemed so much more vibrant, every hue a riot of almost neon proportions. The world always seemed so vivid. It was a world that through its existence prohibited melancholy and sadness. With these memories in mind I picked this picture for June’s Pictonaut Challenge: A Place in the Country. 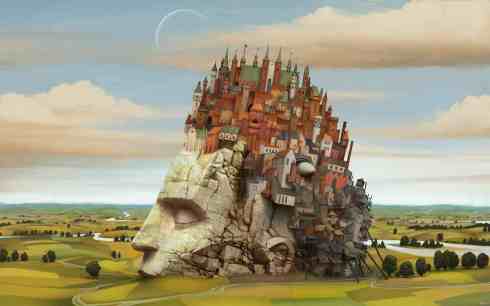 The image is the work of one Marcin Jakubowski. A Place in the Country is not its original name, its original name sounded a bit grim so I thought a change was in order to try and keep the up beat tone I’m trying to instil this month. No doubt come the end of June and I reveal to you its actual name you will have all written something stacked to the eyes with guts, gore, horror and misery. Just to spite me.

I’m sure you all know the drill by now: Your mission, if you choose to accept it, is to write a short story. This short story shall be a whole one thousand words in length (or there abouts, I’m not that stringent.) This short story shall be called A Place in the Country and it shall be based upon the image above. This message, alas, will not self-destruct in five seconds as that would be quite silly, in addition to being logistically tricky.

Now with the picture at our disposal let us don the shades of whimsy, the broad and mighty sun-hat of folly and slather ourselves in factor 30 criticism cream before heading out into the garden of fiction for a jolly nice picnic.

A chemistry graduate consumed by the demons of apathy and disinterest. Likes tea and cheese. Sleeps less than he should. END_OF_DOCUMENT_TOKEN_TO_BE_REPLACED
This entry was posted on Friday, June 1st, 2012 at 12:00 pm and tagged with A Place in the Country, June, Pictonaut Challenge, Short stories, Summer, Writing and posted in Pictonauts, Writing. You can follow any responses to this entry through the RSS 2.0 feed.
« Starwatcher
Out With the Old… »