So here we are in October. 2012 is shrugging out of those ridiculous baggy cargo shorts and the voluminous tie-dye t-shirt she’s be wearing all summer. She’s putting on proper clothes now because it’s starting to get a bit nippy and inclement out there. It’s started to rain a lot, the sun is getting tired and sluggish; it’s getting up later and going to bed earlier. From here on out it’s all boots, sensible trousers and one of those coats with more pockets than are strictly necessary or in fact sane. There is however the distinct possibility of a decidedly silly and not entirely practical hat. Last year October’s Pictonaut Challenge was all about Halloween-esque spookiness and Lovecraftian terrors. Not wanting to repeat the same theme this year I decided to go with something a little outlandish and a bit mad. Just like that hat I mentioned. Behold, October’s Pictonaut Challenge “Hail Traveller!” 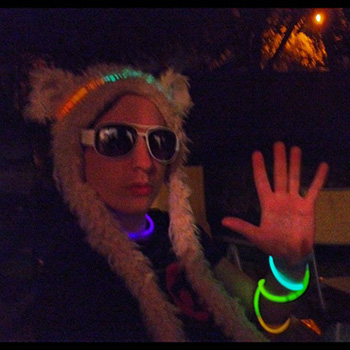 Thematically I see Hail Traveller! as a follow on from last month’s The Journey. I encountered the image in question on twitter, appended to the end of a tweet which read as the image’s caption does. As ridiculous as some elements of the aesthetic, are together they form a kind of mystical undertone, something strange and alien despite the familiarity of its component parts. Before anyone starts to get their undergarments all twisted up and begin lambasting me as being creepy and/or weird (statements which are probably true but unrelated to this) the person featured in the image is known personally to me and I do have their permission. So it’s all about as above-board as you can get on the internet.

Now we all have a month to put together a short story of about 1,000 words based on the image.

With the picture at our disposal let’s grab our glow sticks of wonder and shrill whistles of imagination, take a massive fistful of whimsy pills and head out into the solid wall of sound that is the unlicensed rave of fiction.

The Rogue Verbumancer – A man recounts a night’s veritable weirditude

James Clayton – An experiment in language