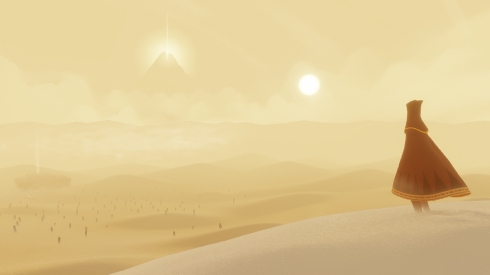 The image in question is taken from the critically acclaimed PS3 game Journey. I saw some video demos of it at some point in the dark arse end of 2011 and fell head over heels in love with its aesthetic. I don’t own a PS3 so my chances of actually playing the game are slim, but that doesn’t stop me from gazing lovingly at screenshots from it.  There’s something haunting about the image, but also a wistful sense of hope. I’m not sure who the artist responsible is but I can say that the game’s artistic director is Matt Nava and the character artist is Ke Jiang. After the slightly heavier literary bent I gave last month’s Pictonaut Challenge I think an injection of some fantastical whimsy is in order.

With the picture at our disposal let’s throw on our cloaks of adventure, pour over the map of excitement and head out into the vast, endless sands of the desert of imagination.

This month once again saw James Clayton waltzing out into the Pictonaut arena. Getting his wordascope all nice and finished by the 10th. And he really got his philosophy on for his effort. It’s almost deep. I also received the first tweeted wordascope, courtesy of Laundry_King. A brief tale of only 72 characters which has a kind of self-contained beauty all on its own. It simply reads “Man looks out over fourth dimensional wasteland. His future is terrible.”

The slightly longer tales of myself and Mr Clayton can be found here:

James Clayton – Nothing is, in of itself, something

The Rogue Verbumancer – What lies ahead?

The Mick– Oh what a tangled web life does weave

The ill-advised venture into the realms of fiction began here and drew to a close here.