So September is here. September; the year of our lord two thousand and fourteen. Today sees the beginning of the 37th monthly Pictonaut Challenge. The mathematically inclined among you should no doubt realise that 37 divided by 12 is 3.083. Three and a bit. Which means that the Pictonaut Challenge is entering its fourth year. It’s all a little hard to take in. I expected to run it for a couple of months before getting lazy or bored, and give up on the whole thing. But no. The damn things has latched itself onto me and simply refuses to let go. It has become the most dangerous of things, it has become a habit. So here we go, number 37.

September seems to have become a month of haunting faces. The tears of the girl in the rain in 2011, the glare of the old Yemeni woman in 2013. September 2012 was an image of a desert, but 2 out of 3 isn’t bad. I saw no particular reason to move away from this general and statistically prevailing theme. For September 2014’s month of faces we have Orange. 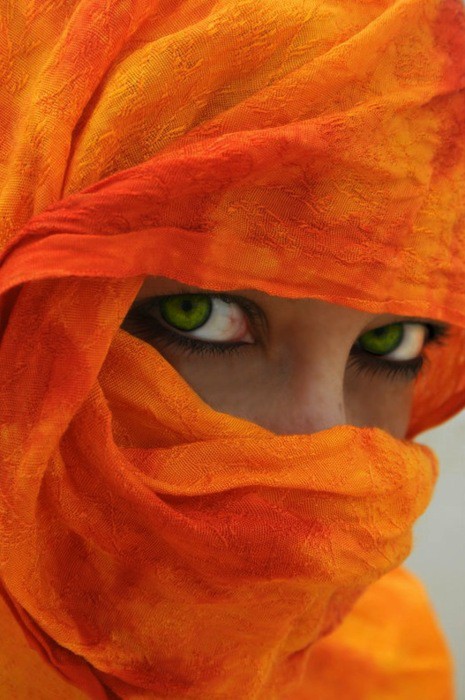 Those eyes. They’re piercing. And the green? It looks so unearthly, almost unnatural, yet it contrasts so sharply and so vividly with the orange fabric. The thing about using a face is that there’s at once both so little and so much to use and work with. A dilemma of where on earth to start, but once the inertia of the beginning is gone it can snowball so rapidly and take on a life of its own.

I think I found this image somewhere on tumblr, or possibly pinterest. Which has made tracking down its actual source and attributing it properly an absolute nightmare, which makes me feel kind of shitty. Because proper attribution and acknowledgement is an important thing on the internet.

For those wondering what this is all about, it is a simple enough premise. You have one month to write a 1,000 words short story (or wordascope) based on the image above. Then at the end of the month we all share them round and have a good read. It’s easy, straight forward and a thoroughly rewarding creative exercise.

So with the image at our disposal let’s sail out into the uncharted waters of imagination, plunging full steam-ahead to the bit which says “here be dragons.”

A chemistry graduate consumed by the demons of apathy and disinterest. Likes tea and cheese. Sleeps less than he should. END_OF_DOCUMENT_TOKEN_TO_BE_REPLACED
This entry was posted on Monday, September 1st, 2014 at 5:35 pm and tagged with Faces, Orange, Pictonaut Challenge, Pictonauts, September, Short stories, Writing and posted in Pictonauts, Writing. You can follow any responses to this entry through the RSS 2.0 feed.
« Junk Yard
Orange »

One response to “September’s Pictonaut Challenge”