Today sees the beginning of December. Two thousand and thirteen takes one last, deep, rattling breath as it summons up a final burst of speed as it hurtles towards two thousand and fourteen. Ready to pass over the baton and see the continuation of the Gregorian calender’s endless relay into eternity.  Gleefully ignorant to the inexorable wheels of time, children across the nation rend tiny simulacra of doors in twain and loot the precious chocolate totems that dwell within. The united forces of consumerism dust of their festive arsenal and array it in full force before us. Ready to assail us in full force with tinsel and baubles and carols and seasonally altered prices. War and chaos are upon us my friends, it will come hard and fast, before rising to a terrible crescendo on the 25th. To a lot of you the 25th is Christmas Day, but to me? To me, the 25th is still Pay Day. 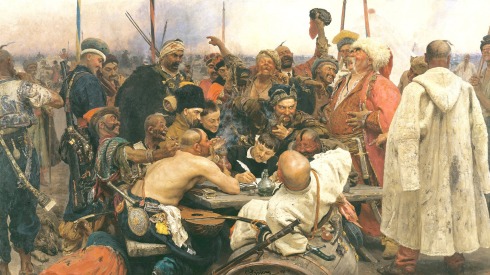 My tenuous segue done with, to business. This month’s picture is an oil painting from 1891, originally titled Reply of the Zaporozhian Cossacks by “Russian” artist Ilya Repin. It currently hangs in the State Russian Museum in Saint Petersburg. (Look at me being all artsy and cultured.) Upon seeing the picture for the first time I got very strong vibes of a mercenary company parcelling out shares after a job well done (hence the name Pay Day) which really doesn’t do justice to the spectacular act of proto-trolling it actually represents. But hey ho.

For those unfamiliar with the Pictonaut Challenge, the concept is simple. You have the whole of December in which to write a short story (or wordascope) of about 1,000 words based on the above picture and title. Then we all share them around and have a good old-fashioned read.

So sharpen those swords, saddle the horses and get ready for the headlong charge into the world of imagination!

A chemistry graduate consumed by the demons of apathy and disinterest. Likes tea and cheese. Sleeps less than he should. END_OF_DOCUMENT_TOKEN_TO_BE_REPLACED
This entry was posted on Sunday, December 1st, 2013 at 11:26 am and tagged with December, Iyla Repin, Pay Day, Pictonaut Challenge, Pictonauts, Reply of the Zaporozhian Cossacks, Short stories, Writing and posted in Pictonauts, Writing. You can follow any responses to this entry through the RSS 2.0 feed.
« Regent
Pay Day »

One response to “December’s Pictonaut Challenge”