A Town Called Spank! – Tales From the Fringe

I’m back from a Kentish wedding, a wedding which I would swear took place on the surface of the sun. Being from the grim and icy wastes of northern England I am still not yet inured to the blistering heat of the late southern summer. To put it bluntly, I was sweating buckets. My heart really went out to the groom, the best man and the usher, all of whom were kitted out in full formal dress, waistcoats, cravats and all; while I sat comparatively smugly in a shirt, without a tie and with my sleeves rolled up. So JP is finally married. I thought I’d take the time this week to continue regaling you with some more Tales from the Fringe and the aforementioned JP’s stag-do.

We did not wake up easily. It came in fits and starts. All of us swaddled in that early morning darkness that gives you no real idea of time. Devoid of a clock you all lie there half awake, playing a deranged game of sleep chicken, not wanting to be the first to wake up, not to be the one impolite enough to wake everyone else up, yet all the time vying against the boredom of just lying there and the gnawing hunger in the pit of your gut. A bloke and friend of JP named Matt was the first to really cave, but under the pretext that he was off to see some triathletes who would be passing through central Edinburgh that morning. Myself and the two Richards dragged our carcasses out of bed shortly after. We had all had perhaps only 6 hours of booze fogged sleep. After spending nearly an hour trying to wrangle all of our rag-tag group together we sloped off in search of a breakfast composed primarily of fat. As any Venerable Sage will tell you, a proper old-fashioned fry-up has magical powers. 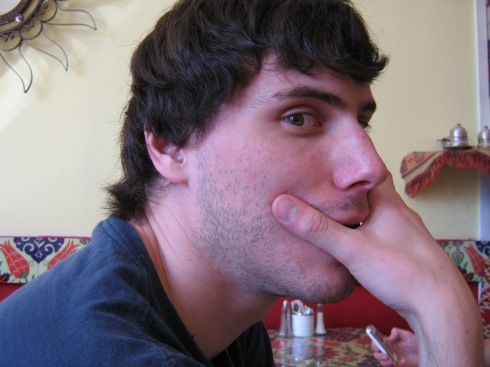 Over this hearty breakfast JP took the time to tell me how much I looked like shit. It was nearly noon and I hadn’t had breakfast, of course I looked like shit. We devoured our food and set about acquiring an Andy, who had just arrived by train from the Middlesbrough area and then set about finding something to see. Unlike ourselves Andy was not scarred by the so-called “performance” from the night before. There was a reluctance on our part to pay for any shows, lest we find ourselves once again disappointed and out-of-pocket. With this in mind we decided to set out to explore the Free-Fringe, which as I understand it, is like the normal fringe except without the actual obligation to pay to see any of it. We picked out Tales From The Unaccepted on the sole basis that it claimed to take place on a bus, a bus with no wheels. We were not disappointed by the venue nor the act. 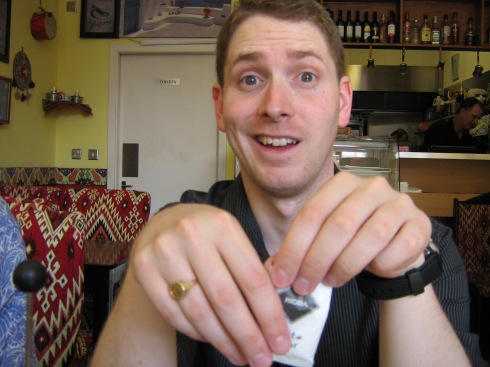 The venue was, as advertised, an actual bus, permanently parked up in the courtyard of a pub and every inch of its outer hull covered in a scrawl of garish and luminous muralised graffiti. The comedians and the hostess we all fantastically funny, covering a broad spectrum of observational, self-deprecative and surreal humour. Since it took place on the top deck of a bus it was very cosy, and very intimate with the acts standing in the aisle right next to us or looming over us like benign comedic gods. Although one of them didn’t so much loom as stoop, he was a tall man and the bus did not give him room to stand straight. At one point when attempting to make a defiant gesture he was forced to stick his arm out the window. I threw the same comedian a bit of a curve ball with one of my comments. During his act he said “the sound of silence” while adding some descriptive colour to one of his surreal life-stories. I was sitting in the very front row, upon hearing him say this leant forward and asked “was that the Simon and Garfunkel version?” The look in his eyes was priceless and mixture of confusion and surprised. He described it as not so much of a heckle, but more of an “interesting comment,” he promptly forbade me from making any more “interesting comments,” but in a good-humoured way that made us all laugh. 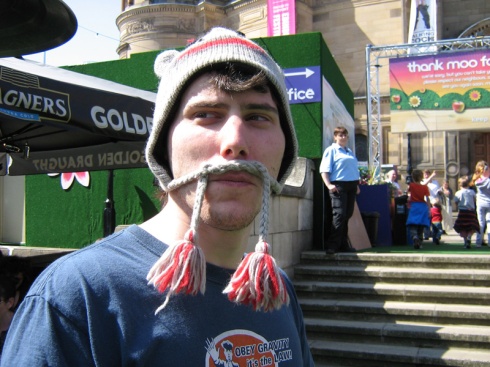 We took in another free show just down the road, it took place in what I was informed was actually a strip club, a place which I’m quite sure is not accustomed to people seeing its innards during the light of day. It was all polished wood and red paint. My most abiding memory of the venue was that the floor was disturbingly sticky, it made a load crunching noise like separating sticky tape. The humour was serviceable but nothing to write home about, although the host’s ever-increasing suspicion that JP’s profession was something sinisterly cloak and dagger was quite a laugh. Our funny bones well tickled it was time for a late lunch. People give the Scottish a lot of grief over their seeming desire to deep fry everything, but because of this I experience one of the most wonderful thing I have ever consumed. The pub Doctors serve “vegetarian fish and chips” which is deep-fried halloumi cheese. It was gorgeous. I wanted to marry that deep-fried cheese.

After we’d sated the nagging of hunger we headed off to see another free show, one put together by half of The Men That Will Not Be Blamed for Nothing  for steam-punk themed shenanigans of song and stand-up. They were blighted by massive technological problems with their microphones and amplifiers, but manfully soldiered on all the same, making what could have been a show ruining catastrophe fantastically funny. Such was the quality of both their humour and their songs that come the end of the show I quite happily dumped a fiver in their donation bucket for the pleasure of it all. Their set of Victorian themed songs with a Cockney bent we both funny and well performed and their stand-up banter sharp, self-deprecating and solid. And in general served to finally banish the sour taste that had been left by the god-awful swill we’d had to put up with the night before. One line sticks in my mind from this show, it was simple, to the point and observationally true. It was the jollily sung “Oh humble house-brick, where would we be without you? Outside.” 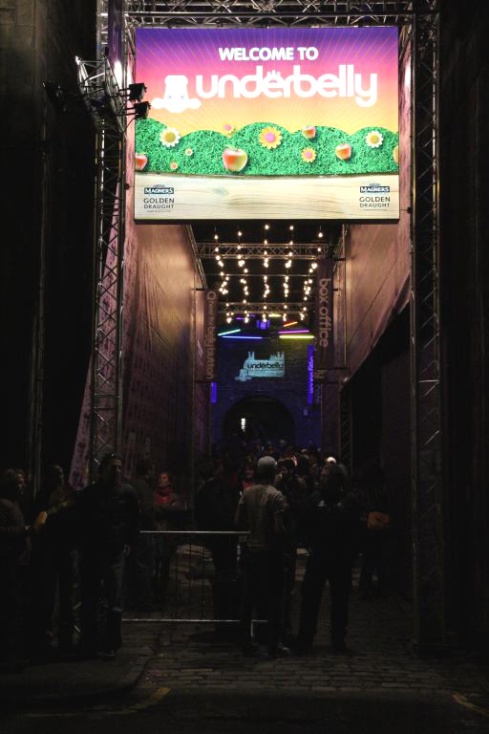 Buoyed by the sheer quality of humour we made our way, via pubs and drinking establishments of course, to The Underbelly for a midnight show simply entitled: Spank! The Underbelly is a grungey place, a titanic courtyard under a railway arch surrounded by low-ceilinged rooms whose aura of industrial dilapidation no amount of paint can hide. I’m not entirely sure what I expected from Spank! But I can certainly say that I did not expect it to be quite so good. While the abortive and juddering musings about bear-rape on Friday night were clearly the low point, Spank! was the high point. A very, very high point. Sure we’d seen some could stuff earlier in the day but comparing it to Spank! would be like comparing the peak of Everest to a weather satellite in geosynchronous orbit. We were treated to 3 hours of good, solid comedy.

First we had sketch comedy featuring a skit about blacksploitation themed crime drama featuring 17th century classical composers and puns galore. Then two solid young comedians, probably barely out of uni. The first told of how he played “I have never…” by replacing all references to sex with travel-scrabble. The second of the two ended his set with a free style rap based on audience suggestions, thus was spawned 3 minutes of tightly clustered lyrical humour featuring Coronation Street, having a massive shit, Blockbuster video and toast. Upon conclusion the response from the crowd was thunderous, and I don’t mean that in a descriptive sense, this isn’t any attempt adjectival artistry, the sheer volume of clapping, cheering and foot stomping was akin to the sky exploding in volume and rumble. There was the grotesque Spanish lothario bringing us Sacha Baron Cohen-esque character humour. By the time the up and coming comedian Vikki Stone had finished her set with a salacious dildo themed cover of I need a hero, having previously regaled us with the problems of a comedy award hamper consisting of 16 bottles of lube; my side were aching from laughter. Such was the barrage of hilarity that hit me that night I know that a lot of what happened slipped through the cracks of my mind.

As the show’s motto goes:

(What’s wrong with you?)

A chemistry graduate consumed by the demons of apathy and disinterest. Likes tea and cheese. Sleeps less than he should. END_OF_DOCUMENT_TOKEN_TO_BE_REPLACED
This entry was posted on Monday, August 20th, 2012 at 4:00 pm and tagged with Comedy, Edinburgh, Spank!, Stand-up, Tales From the Fringe, The Fringe and posted in Ramblings. You can follow any responses to this entry through the RSS 2.0 feed.
« Saunas and Bears – Tales From the Fringe
The Last Hurrah – Tales From The Fringe »