So we finally arrive for but a brief and fleeting visit to the greatest of all months, February. I like February, not simply because it is the month of my birth (although I suspect that does bias me in some way), but because February is unique, flexible, changeable. February doesn’t play by anyone’s rules. With perhaps the exception of the rules of the Gregorian Calender, but you don’t mess with him, for he is well hard. February is the cool month, standing out from the crowd with it’s 28 days. Were February a person it would wear a leather jacket and have the strange and arcane powers of jukebox necromancy. It’s is also literally cool, well more cold really. The temperature of February being, on average, lower than the rest of the months of winter. Winter, of course, being the greatest of all the seasons, and even though having to pay for my own heating has lessened my love of winter, my love of February remains strong.

Not all people share my love of February however. An Old English word for February was Solmonath which means mud month, which if we’re honest is less than flattering. Although wikipedia tells me that the Finnish, for February is helmikuu, meaning “month of the pearl” which is quite beautiful. My blatant theft from wikipedia aside we should probably get down to business. What with it being the first of the month and all, you folks probably want a picture for the Pictonaut Challenge. You can be so needy sometimes! 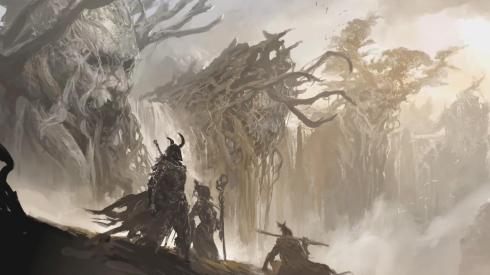 There isn’t really a theme as such for this month. Sure I could have shoehorned in a picture that somehow linked to winter or my birthday or just pulled a contrived theme out of the aether, but no. This month’s picture has been chosen simply because it’s been sitting in my pictonaut folder looking awesome. I am that shallow. The picture is the work of one Kekai Kotaki of whom I am a big fan, his work having graced the concept boards of various computer games, the covers of numerous books and even the artwork on a number of Magic the Gathering cards. The title that we’ll be operating under for this month is Faces in the Woods, for reasons which should be readily apparent.

So with the picture at our disposal let’s strap on out sturdiest walking boots and set out into the uncharted wilds of the dream-realm, with nothing more than our story-compass and a stout cane of vocabulary to aid us in our quest.

A chemistry graduate consumed by the demons of apathy and disinterest. Likes tea and cheese. Sleeps less than he should. END_OF_DOCUMENT_TOKEN_TO_BE_REPLACED
This entry was posted on Wednesday, February 1st, 2012 at 12:19 pm and tagged with Faces in the Woods, February, Kekai Kotaki, Pictonauts, Short stories and posted in Pictonauts, Writing. You can follow any responses to this entry through the RSS 2.0 feed.
« The Reliquary
Seconds Out »