This morning was the first day of the year where the cold really started to bite, and it chose to bite hard. The walk home from work was one of those times where you cannot keep your hands uncovered or out of your pockets for more than a minute before they start to burn with the lancing white fire that is the teeth of cold and thousands of nerve endings screaming with horror at its coming. I had a pair of gloves so I was quite fine and content, for they are big warm gloves made from the skin of a mighty beast. By that of course mean, a cow; if anyone takes issue with a cow being described as mighty, just remember that mighty is defined as “possessing great and impressive power or strength”, something which becomes all too apparent if one is charging angrily towards you. We so often forget how big cows really are. Of course the leather could have been from a pig, then I’d have to agree; pigs are proper shit. My meanderings aside, the weather seemed somehow appropriate for the topic of this week’s blog. For today I talk about the cold and unforgiving realm that is Skyrim.

Skyrim, for the uninitiated, is a computer game. The sort where you stomp around a world (a very nordic themed one in this instance) in a big tin can (or a small one, should you so choose) and beat the ever-loving wiffle out of anyone and anything that gets in your way. In the case of Skyrim it happens to be dragons that are getting in the way, and we all know that nothing is made worse through the addition or presence of a dragon. Dragons are cool, especially the ones that seem to vomit steaming geezers of liquid nitrogen into your face; Nothing burns quite like the cold. I’m not going to bore you all with some inane and inept attempt to review a game that many people will have already done a much better job at doing. I want to talk about the story, the thing which propels this colossus of a game forward.

The game itself came out mid-November, something which clashed terribly with NaNoWriMo, I had been looking forward to Skyrim for so long that I very nearly abandoned the entire idea of participating in NaNo just so that I could play it as soon as it was released. The later end of November was torturous, not because of the relentless demands of word counts, but because everyone else was playing Skyrim and I wasn’t. So the past weekend, with NaNo out-of-the-way, no social demands and the game in hand, I plunged into it head-first. I went deep, perhaps too deep. From arriving home from work on Friday afternoon to going to bed Sunday night I racked up somewhere just south of thirty hours of play time. Thirty. Which amounts to pretty much every single moment that I wasn’t asleep. So what exactly makes it so compelling? So enthralling that I eschew all other things in favour of its prickly and unforgiving embrace? 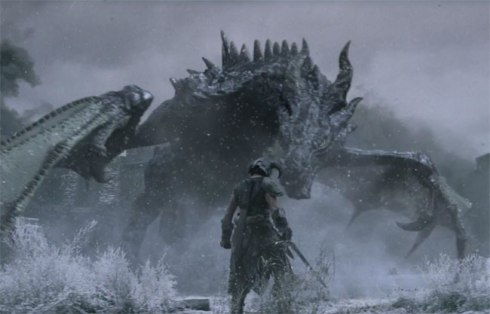 Visit scenic Skyrim for its friendly and welcoming wildlife

Well asides from the Dragons that is. I would have to say the story plays a very big part. The main storyline is nothing new, innovative or really all that remarkable. It’s the old tried and tested “Shit’s hit the fan, go fix it” scenario of one person, coming from seemingly nowhere to fulfil an arbitrarily defined prophecy while kicking ass and chewing gum and as an Arctic tundra, Skyrim’s all out of gum. The thing about that old chestnut, is that it works. There seems to be something incredibly appealing about the tale of the downtrodden underdog stepping up to an insurmountable challenge and punching it in the face so hard that it just gives up and goes home; is instantly liquefied; cast back into the aether from whence it came; take your pick. In this instance you begin as a prisoner and no sooner than you stand up you’re flung head long into a dragony apocalypse, occurring against a delightful backdrop of vicious civil war, and then you discover that you are Dragonborn and there’s a smattering of prophecy related to that too. So as I said, nothing out of the ordinary really. 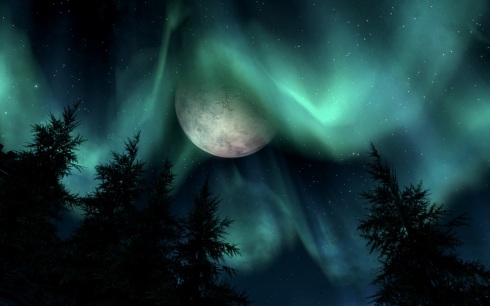 Sure, everything's trying to kill me, but I can't help thinking how pretty the view is

The thing which I have been finding so compelling is not this overarching plot, that’s just a thing holding everything together in a loose semblance of order. What I’ve been finding so enthralling are the little jobs and side-quests I’ve been finding myself doing, the odd jobs which don’t have the massive driving force of an overarching plot and more or less leave me to fill in the details. The main plot itself has a fair bit of wiggle room to come up with your own motivation as to exactly why you’re doing what you’re doing too. And so did I become the helpful man-about-town; a man willing to lend a hand and help out with even the most mundane of problems. Need a package delivered? I’m your man. Need a particularly viscous wolf killing? Just drop by and ask. A man devoted to the ideals of the empire (of which Skyrim is but one part) but not to the people who run it. These little distractions sucked me in, minutes rolled into hours, and hours became days. It wasn’t long before I found myself musing over how to decorate the house that the local Jarl (or king) had let me buy when the errant thought of “didn’t the world need saving? Should I get back to that?” to which my response was “No. It can wait, I want the house to look nice, the wife’s going to be back soon.”

It’s main plot is just an excuse for everything else; a lattice to weave all the myriad of threads of quests and guild and organisations about. It’s not what’s in the story that makes it so enthralling, it’s how it’s put together.

A chemistry graduate consumed by the demons of apathy and disinterest. Likes tea and cheese. Sleeps less than he should. END_OF_DOCUMENT_TOKEN_TO_BE_REPLACED
This entry was posted on Tuesday, December 6th, 2011 at 8:15 pm and tagged with Adventure, Dragonborn, Dragons, Legends, Skyrim, Stories and posted in Ramblings. You can follow any responses to this entry through the RSS 2.0 feed.
« December’s Pictonaut Challenge
Northman »

One response to “The Dragonborn Comes…”