People have a lot to say on the subject of birds. They so easily become associated with ideas and concepts. You mention peace: you think of doves; You mention wisdom: you think of owls; You mention pride: you think of peacocks; You mention winter: you think of robins. By and large these associations are to fairly mundane or innocuous things, things we can understand and put a name to, there is a comforting innocence to them. But the Corvids? There’s something cruel and sinister about corvids. You just need to look at the names we give groups of them: an unkindness of ravens, a murder of crows. Some people might say “but a parliament of rooks doesn’t sound so bad.” Those particular people have a fundamental misunderstanding of the workings and nature of government. Some others might say “What about magpies? They’re okay, right?” The magpie? The bird forever associated with theft and pilfering. The magpie is the synonymous with ill-omen, almost to the extent of the dreaded raven. And then there’s the rhymes, superstitious chants passed down from the very edge of the dark ages:

Three for a wedding,

Seven for a secret, Not to be told,

And ten for the devil’s own self!

Nothing good follows the arrival of a corvid, much less whole flocks of them. We should have ran the moment they appeared. But what did we know back then? We were sensible modern folk. We didn’t care a jot about the superstitions of our forebears; quaint and parochial fools, terrified by things they did not truly understand. “They’re just birds” we thought. We were arrogant. We were the ones who did not truly understand. We never thought to consider where the superstitions hand come from in the first place. Not until people started to go missing.

It probably started some time around that fuzzy period around the end of summer and the start of autumn, around the time they’d rolled the big combines into the fields on the edge of town. No one was really sure who the first person to going missing was. A single disappearance, though tragic, isn’t anything out of the ordinary. It’s, or rather was, a big town. Sometimes these things happen. And even when a few people just vanish, the police would be hard pushed to prove that they hadn’t just run away from home, or eloped, or just gone missing in the woods. Like I said, these things happen. I say it started at the end of summer because that’s when the ravens and the magpies first started to really show up. We didn’t really cotton onto the fact that something was really going on until winter started; when the temperatures dropped and the nights started to draw in. That’s when the “vanishings” really started happening.

The vanishings couldn’t be explained away so easily, they weren’t cases of people going missing, they were cases of people just disappearing. You’d be walking down the street, late at night, with a friend at your side, you’d glance away from them, just for a second, and when you turned back they weren’t there. They would just be gone, without a sound; there one moment, and gone the next; swallowed up by nothingness.

All that could ever be found of those who had so inexplicably vanished was a faint stain upon the ground, a smear of red; something like blood, but not quite blood. The red was too vivid, and never faded, nor could it be scraped away or washed clean.

With each and every vanishing there grew a pervasive feeling that there was something was out there, watching us. Something cruel and menacing leering at us from the dark. The kind of feeling that makes the hair on the back of your neck stand on end. In the beginning it was more subtle than fear, it was a weary edge to our thoughts and lives. But as more and more people disappeared, that feeling grew and grew, spreading out over the town like a grim blanket. With every soul we lost to the night the streets and roads grew more stained with the strange redness; an ominous and creeping doom.

We were helpless. How could we fight something we did not understand? And so the days and the people slipped away until there were hardly any of us left. By the time the first snows came, our once thriving town became desolate: empty houses, empty streets and empty things on the prowl. Snow piled up thick and white, while mist and fog hung low and heavy. The town became a surreal place of starkly contrasting red and white.

With the snow came the sightings of what we thought hunted us. Hollow and eyeless things standing still in the middle of the street, in the cold light of day. White shrouded wraiths whose cloaked forms were not stirred by even the strongest of winds. I’d see them out of the corner of my eye, but every time I tried to look at them, they would vanish within the blink of an eye.

By this point there were so few of us left. Even if we had known how, we couldn’t possibly have stopped these ghostly shells of people not there. I don’t know what had brought them out of hiding. I don’t know if they’ve gotten bolder or simply gotten hungrier.

Hiding in my home, behind barricaded doors and boarded-up windows, I think that I’m the last of us. Through the gaps I can see the ravens and magpies outside, crowding the fences and telephone wires. 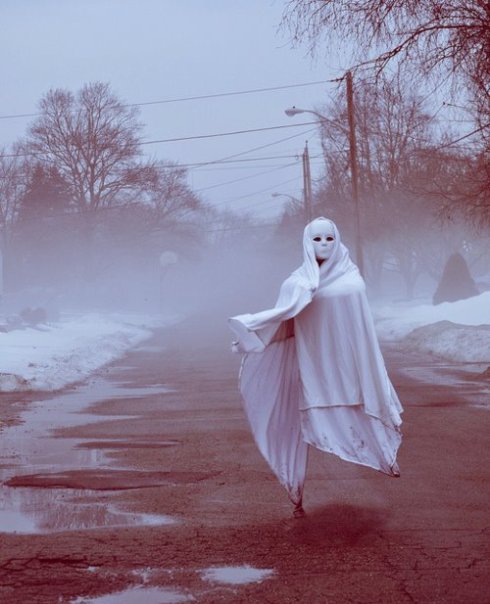