Space is a lot like the ocean. They are both vast in a way that frontiers once unexplored remain even once mapped. There’s a certain feel to them that, despite the colossal gulf in their actual size, that suggests a certain peculiar loneliness, an emptiness in reality, a singular lack of something. The similarities do not end there. Both space and the seas, they are both unfathomable, fickle, cruel, tempestuous; you would not trust yourself to either, for if they see even the smallest chink in the armour of your vessel you will be rent asunder and left quite incontrovertibly and resolutely dead. And beneath and within all of this detached violence is an alien realm, one full of secrets. About the only word you can use to describe an ocean which you can’t apply to space is “wet.”

Space has suffered the same ignoble fate as the ocean did so many centuries ago. Eventual the wonderment, the fear, the romance of the frontier fades away. Year by year, until it’s all gone and the expanse becomes just a thing, a fact, something that’s just there. And once these things go the respect goes with them. With that they become places to dump things. Our unwanted detritus, our cast-off junk, the things we just want rid of. They sink into the abyss or tumble through the void, caught on tides or cosmic currents; tangents through immeasurable space. And we just keep going, until we lose track of most of what’s out there and the dangers they might hold, until the whole of the sky is filled with our mistakes and our missteps.

The shallows are generally filled with the small things, the innocuous flotsam and jetsam of daily life. True, there are things which are beyond the mundane and into the territory of the deadly but they things which are understood. You know not to prod them and you know exactly what will happen if you do. There is life here, the reefs and lagoons are easily observed.

As you slide out into the murk, as the sea bed drops away things get bigger by degrees. You start to encounter things which inspire awe and fear, objects and entities whose titanic majesty loosens the jaw if not the bowels. To witness them is to feel a shudder across the spirit meat of your soul. And so it goes, a rising crescendo of power and force until you reach the deep.

The Deep: a lightless void; cold and mostly dead, mostly… Within this inky blackness is that which mankind does not understand, even if they were made by their hand. Sometimes especially if they were made by human hands. Within this impenetrable darkness is where humanity truly loses track of things. The Deep is where the unfathomable live; where the legends dwell, that which seems so improbable and mighty, and lost or banished so long ago as to have become almost fiction; where horrors too dread to speak of drift through the night, praying on the unwary, the foolish and the brave. This is the myth place. A place full of threats and dangers, and it is into this benighted and nightmare realm that we send the hunters. 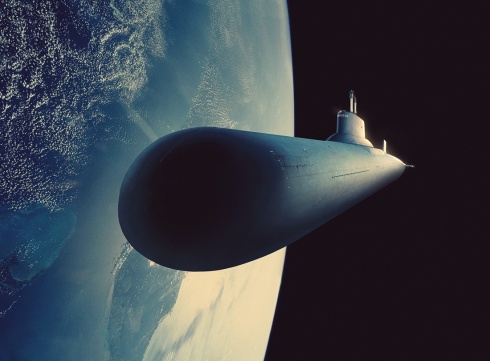 It is a widely accepted truth that nothing stays buried forever. Eventually the wheel of the cosmos turns everything comes around again, bubbling back to the surface like a bloated corpse. The proverbial bad penny, karma; call it what you will. A wise man takes steps, steps to make sure that a potential threat is dealt with before time. And so we have our silent guardians, the token effort of a perpetually guilty conscience to clean-up our myriad of messes.

The silent hunter-killer. A slick and slender tube of death; Black on black, stalking through the silence of space.

It is not a task you could entrust to normal men. For once the hunters are sent out, they do not come back. A hunter keeps going until it is killed or destroyed, that is how it works. So the task falls to something else. The hunters are crewed by things which were once men. But now they are nought but husks, pale simulacra of life. Animated not by the mysterious and intangible vitae but by dark cybernetics. A pump where there was once a heart; preservative fluids where there once was blood; batteries and relays where there once was nerves; it is a shadow of life, fuelled only by hard-coded software routines and the echo of the hard-bitten military folk they used to be; not quite dead, but almost.

Clinging close to the magnetospheres of iced gas giants the hunters lurk. Bathed in the flickering coronas of dying stars the hunter wait. Lost within the spectral cries of quasars the hunters watch. Sometime they will follow their prey for centuries, waiting for just the right moment to pounce. The hunters are patient, they have no need for food, for water, for air and their justice never sleeps. When they do pounce it is without mercy, with a cold, implacable purpose. It is at once clinical and bestial. Mass-drivers shred hulls and breach bulk heads like claws rend flesh. High energy lasers fuse shut drive bays and exhaust ports. A lifeless crew swarms over whatever is left picking the bones clean and executing whatever vestiges of life remain. The hunters always dance on the brink of becoming what they hunt, falling into monsterdom or abominationhood. Few are willing to entertain one thought above all others, fear prevents the words being voiced. But on day it will come to it, of that there is little doubt. One day someone will have to answer the question:

“But who will hunt the hunters?”