The Rogue Verbumancer – Oct 2011 The Writing on the Wall

The main building was an edifice of its time, a monument to its age. A soaring concrete behemoth, grey and washed pale. It was a relic of the early 60s, and like so much from that era, time had not treated it well; any colour it had once had was bleached and faded, white had become nicotine stained yellows, brazen reds become the colour of old blood, bright blue become the colour of mould and decay. This was the Sanatorium of St. John and Cross.

I, Doctor Montgomery Barnston, arrived late on a Thursday afternoon in mid-December amidst a downpour that had not let up since I’d left the city five hours earlier, it was a long drive to the lone and isolate heath upon which St John and Cross was built. As I gripped the handrail to climb the stairs to the main entrance the first peel of thunder rang out across the landscape. The suddenness of it startled me and reflexively I withdrew my hand from the rail and discovered it coated with a mixture of rotten paint and rusted iron. Wiping my hand on my sodden coat I proceeded up the stairs without the handrail’s assistance.

The reception hall of the sanatorium smelt faintly of damp and antiseptic; the smell of hospitals and time. I was greeted by a young duty nurse sitting behind one of those glass reception windows, she had deep black circles under her eyes and an air of haggard weariness.

“I’m here for a consultation. Dr Hemming requested me” I informed the nurse.

She stifled a yawn and directed me to an office on the third floor and buzzed me into the building proper.

I found Dr Hemming asleep at his desk, a restless looking doze, punctuated by murmurs and fidgets. I rapped my knuckles sharply on the doorframe. Dr Hemming awoke suddenly with a startled shriek and terror in his eyes. His darting and panicked eyes rapidly settled into the steady gaze I remembered from our few previous meetings. I noticed too that he seemed haggard and exhausted, his face pale and his eyes ringed.

“Sorry to startle you Geoff, it’s me. Monty. Monty Barnston? For the consultation.”

“Monty? Monty, ah yes. Sorry about that, you gave me quite the fright, must have dozed off. What with the closure and relocating all the patients I’m a bit run ragged at the moment, we all are.” Dr Hemming sighed. “I suppose I better take you to see him.”

I was lead through a winding series of corridors, Geoff talking as we walked. 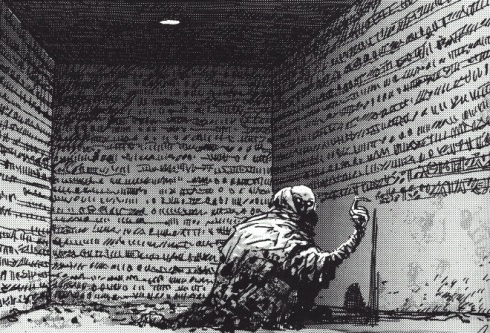 “The patient in question is over in the west wing.” Said Geoff

“How long has he been here?” I asked.

“I’m afraid we’re not entirely sure. A great deal of the patient records were lost when a fire destroyed the majority of the building during the war. So all we know is that he’s been her since at least since late 1940.”

“But that was over seventy years ago! How old is he?”

“Ninety? Maybe older. It’s all guess work really, we don’t even know his name, one of the nurse back in the 50s took to calling him Bede. At a loss as to his actual name it stuck.”

“I take it you tried asking him?” I replied wryly.

“In the entire time here’s been here he’s not spoken more than a handful of words. His name wasn’t among them.”

“Does he present any other major symptoms other than the chronic hypergraphia you mentioned on the phone?” I enquired.

“Nothing that can’t be categorised as a by-product of the hypergraphia. There is however one curious aspect to his writing.”

“We had some linguists from the university look at it, they said it was an untranslatable derivation of Akkadian cuneiform, possibly of his own creation. That is of course assuming it does actually have any actual meaning.”

We walked the rest of the way to the west wing in silence, the drab plasterboard walls and bristle carpet finally giving way to cream coloured tiles and varnished wood. It, to me, resembled a school, a hospital and a prison all at once, while truly resembling none of these places. We stopped before a large steel door, painted a faded duck egg blue white the number 213 stencilled onto it in dirty white letters. Dr Hemming took a hefty looking iron key from his pocket and slid it into the keyhole. The key turned with a stiff clunk and the door began to swing open. The room was windowless, with black walls and lit by only a single bulb; the light it provided was minimal at best. As I recall it smelt faintly musty, an odd dry, crypt like smell; as odd as it may sounds it smelt like time, time gone and passed, time turned to dust, it was how the bottom of an hourglass would smell. A small emaciated figure sat before one of the walls, festooned and cowled in a ragged and stained bed sheet. This was Bede.

Bede dipped a proboscis like finger into a tiny pot in his hand and scratched with his nail onto the wall like it were a crude quill. Slowly moving into the room I realised the walls were not in fact black, but covered in a densely packed script; leaning closer I saw it was comprised of tiny and neat dagger shaped strokes, intersecting with and stacking upon each other; some were barely thicker than a hair.

Bede remained engrossed in his writing, not even acknowledging my presence. I crouched down next to him.

“What are you writing about?” I asked

Bede’s head snapped to face me, cowl falling from his head. Now distracted from his writing I finally saw what he looked like. He was hideously bald, his scalp dotted with liverspots. At the centre of his face sat a small button shaped nose that seemed almost stunted and withered, not quite freakish in its appearance but possesséd of a strange peculiarity that made the entirety of his face seem just plain wrong, slightly off, ill fitted to this world. A lizard like tongue massaged toothless gums; that was when he spoke to me. His vocal cords were long since atrophied by disuse, almost to the point where they could not be used, but all the same he spoke. The words his uttered we almost sub-vocal in their pitch, like an errant breath of wind in a desert summer; quiet, fleeting, dusty, and in a strange way almost threatening, a faint promise of an approaching sandstorm that would flay you to the bone. His response to my question was but a single word, but oh what he conveyed in that word. The word was:

I raised my gaze so that I could look him in the eye. It is a decision that I will regret until the day I die, and I fear that that day may be an dreadfully long way off, but also a mere blink of the eye of something far vaster and more ancient than I could comprehend. Bede was blind, that much was immediately evident, but his eyes were not the milky white of age-borne cataract; His eyes we orbs of a striking, luminescent white, without any form of smear or occlusion. They were, despite there obvious deficiency in ordinary sight, perfect. Looking Bede in the eye I saw… I cannot remember what I saw. I can only remember how it left me feeling. What I saw in those eyes was fleeting, but eternal. I only held his gaze for a scant few seconds but those seconds seemed to stretch out into infinity. I remember that it felt like falling through the skin of reality, as if into a vast and unquenchable void, remorseless in its grand infinity, pitiless in its unfathomable ways, resplendent in its isolation. And all the while, as I fell through the inky not-blackness of a void I will never remember it felt like I was screaming; a scream without sound, a scream that would not end, forever seeking to echo off surfaces that did not exist. A scream upon which worlds could be built, upon which empires could rise and fall. Late at night I often find myself wondering more and more frequently if that was the truth of what I saw; that Bede was everything turned inside out, that all of the cosmos was held within those cold, white, unblinking eyes and that all of creation was just the endless, tortured scream of reality.

I blinked and tried to shake away the cobwebs of confusion that choked my brain, to affirm to myself that I was really alive, trying vainly to grasp where I was and even who I was.

“Everything?” I managed to choke out.

Bede nodded sagely, as if he knew the exact nature of what I had seen in his eyes, and the precise magnitude of what it truly was.

Bede placed his little pot of ink on the floor of the room and wiped his finger on his bed sheet robe.

“I am finished now” Bede said

“You’re not going to write anymore?”

“My tenure is over.”

But Bede did not answer, he was already crawling into the corner of the rooming, curling himself into a tight little ball, wrapping his stained bed sheet about him. He closed his eyes and died.

Any further consultation as to the mental state of Bede and his move to the new hospital seemed somewhat moot after that. I took the car back to the city that night, not wanting to stay anywhere near the place that had left me so shaken and unsure of everything. I heard that they cremated Bede and scattered his ashes in the Sanatorium’s garden.

That was five years ago, but even now it still doesn’t feel like he’s gone, as if some ephemeral part of him survives even now, something more than flesh, the part of him that lived inside those eyes. I still have dreams about what I saw in those eyes, I wake up sweating in the depths of the night, wracked with incomprehensible fear and a dread that seethes in the pit of my stomach. No matter how many times I revisit that strange ocular vista in my dreams I never remember what I see, I just awake with those same feelings I had the first time I looked Bede in the eye.

I don’t think I’ve had a restful night’s sleep since that day, my eyes are ringed and my face gaunt, I feel forever weary and my eyes constantly fog with desire to sleep. Whenever my mind wanders I find myself idly doodling those neat, little dagger shaped strokes; the glyphs meshing together, stacking, intersecting. I find it cathartic, it reminds me that it actually happened, reminds me it’s not just a bad dream, reminds me that it was real; for I am still haunted, by the writing on the wall.