May. A month of dancing round poles and the subsequent phallic symbolism such an act invokes. A month of two sweet and solid bank holidays; the last before a drought that save for a brief respite in late August will last until the end of the year. Summer’s not quite here yet. I can sense it though, just around the corner, just waiting for a chance to start flaunting its heat. But with that heat there is the promise of cider, beer gardens and nights as clear and crisp as cut glass. And with the burgeoning swell of summer comes the desire to throw open all your windows and crank the stereo all the way to eleven and let music fill the air. And that leads us, by an unwieldy and overly circuitous route to May’s Pictonaut Challenge: Music Box. 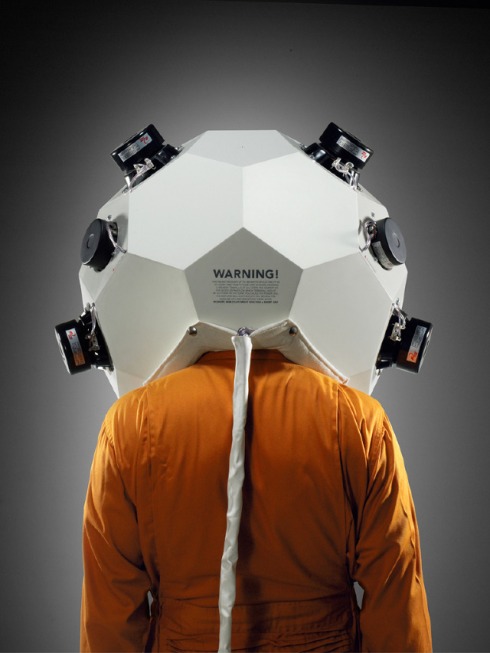 This month’s picture is the work of designer Mike Kim. A person in an orange jump suit, confined within a truncated-icosahedron of speakers. Is there a head in there? Is there nothing at all? Are there the remains of 3 butchered mutually orthogonal golden rectangles? (That’s some obscure geometry humour there.) Maybe a bit sci-fi? Maybe a bit dystopian? It could go a lot of ways really.

Now before I bid you all farewell, there is the traditional recap as to exactly what I’m waffling on about. You have 1 month to write a 1,000 (ish) word short story based on that picture. Then at the end of the month we all get together, share them and give each other a jolly good pat on the back for being so smashing at writing.

Now cut the mid-range and drop the words

James Clayton – They were in my head…