It was sometime in the dark and forgotten hours of the morning, the kind of time that is so utterly alien to most good and decent folk that, it is in of itself, an entirely different world, let alone a different country. Between night and morning is a thin sliver of existence, a place where normal rules don’t apply, somewhere where things are both familiar and alien. Colours shift into strange, nocturnal shades of themselves, a thousand different hues of silver and blue and grey and black. In these strange and oddly ephemeral hours, the entirety of creation cuts loose and dances in the dark. The vault of the heavens were a clear obsidian of such deepness as to emulate the unfathomable reaches of its very nature. Every tiny pin-prick of blueish white that was a star was a tiny window into a world of mystery, hope and possibility, they were the tears of angels, the sweat of gods and the droplets from the misty waterfalls of myth. The vista laid out across this world was one that touched a thousand others across the vastness of the galaxy, even though the commonality of its occurrence would ordinarily diminish the worth and beauty of such a thing, it was not the case for a sight such as this; an exception to the maxim that would suggest its majesty and luxury should have been shifted towards the mundane. On the horizon of this small and dusty plain a cone of white light shone out, racing closer and closer as the moments went by. As it came on and on it brought with it a faint and hitch-pitched hum, throaty yet keening, a whirling amalgam of noises at the edge of hearing, condensed into a beast that was more than the sum of its parts.

The bus glided to a stop on a cushion of pale blue light, grav-motors whining slowly down towards to their idling speed. A squat and gleaming cylinder of glitter-steel, it hung ominously in the air, studded with big round portholes that gazed out from its shell-like blind, judging eyes. With a hiss of cryo-steam it bellied down into the gritty embrace of the road strip, scaffolded steps slid out of its nose and hit the ground with a sonorous thunk. Down the steps and out of the bus came a figure, a featureless black silhouette against bright, white light and shining steel. With an impromptu skiffle-hop they landed on the blasted flags. They had arrived at last in Potenta Station. The young man gazed about the deserted gloom of Potenta. There was no doubt that it was a young man. Although the hitching of the prodigious ruck-sack was genderless, as was the subtle bounding jive to unheard music from the over-sized headphones adorning their head, even the slight fidgety shaking synonymous with the lingering effects of caffeine shock was remarkably sexless. The rough and uninhibited groping and shifting of the crotch was however, unmistakably male and spoke of a man sat in one place for far too long. The young man strode away from the bus with a rhythmic bounce in his step mumbling along to the music that filled his ears. Upon reaching the stone seat-sill of the bus stop, he slumped down onto its surface. Without even removing his ruck-sack he promptly fell asleep.

Sitting stooped over his knees in the dark, with his pack still on his back, his head gently nodding his silhouette took on the appearance of a vast and grotesque, hunched man-beast. A predator waiting in the dark. The dark turns all things towards terror, it is what it does, for the dark is a mischievous creature who delights in such japery. So there in its embrace the young man dosed, sitting in the lee of the vast blue, stone nav-marker that was Potenta Station. The bus had long since left. This was a lone stopping point amidst a vast expanse of dusty nothingness, he was the only soul here, a thousand miles from any other. Or at least so he thought. As night slipped away toward dawn the sleeping man began to get a subconscious feeling that he was being watched, a quiet scream in the animalistic hind-brain that lurks in the nether regions of the psyche. He awoke filled with terror to find a woman sitting next to him, staring at him with an intense curiosity. The young man calmed himself with deep breaths. 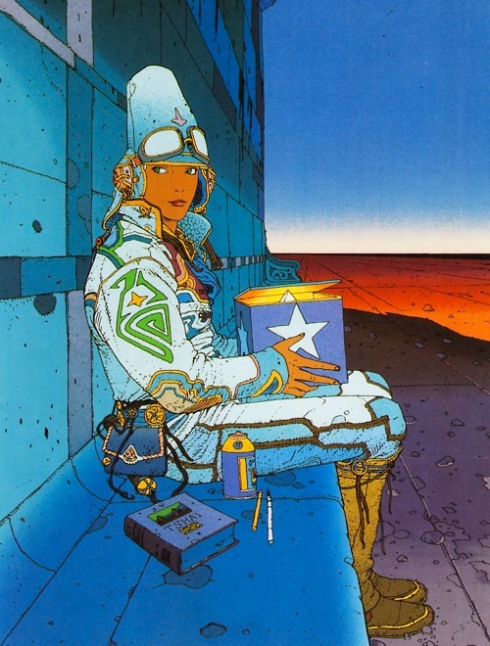 “You scared the hell out of me!” he said. “Why were you watching me like that? It’s kind of creepy you know.”

“I was watching the stars.” She replied. “But then they went away. Now I watch you.” Her voice sounded slightly thick, with an odd lilting base-tone to it, as if despite her familiarity with the language she spoke it was still not entirely native to her. A close associate but not yet a friend.

“Why?” the young man asked.

“You looked funny.” She shrugged. “Sitting there with big bag on back, nodding like sleepy donkey. Made me smile”

“Gayane Al-Taftazânî” she said, thrusting out her hand “Many pleasures to meet you Mister Traveller!”

“Almund Skeete” he replied shaking her proffered hand. “Although most people just call me Al.”

“Hello then again Mister so-called Al, welcome to Potenta Station with all its wonders and many and varied amenities.” She said gesturing around herself with wide sweeps of her arms.

“I don’t see anything other than this big stone nav-marker.” Said Al.

“Tssk.” Gayane hissed back “You are not looking. You see but you don’t see. Just as blinkered as you were when you got off bus and sat down next to me. Ignoring me! Me! Gayane Al-Taftazânî Mistress of Many Wonders and Seer of Many Things, Walker of Many Places. A pretty lady might get offended by this. But you were sleepy then, mayhaps you still sleepy now? Gayane forgives you.” She clasped her hands over her lap and went back to looking out into the distant orangey wastes of the horizon.

The entire sittuation stuck Al as being decidedly odd. Part of him was of the firm opinion that he was still asleep and all of this was just a dream. A particularly and singularly odd dream, but a dream nonetheless. This “Gayane” seemed far too absurd to be a fixture of the outwardly seeming, sane and rational reality in which he thought himself to inhabit. Even her clothing seeming patently absurd, a hodge-podge, motley of pieces from a dozen different cultures. Tied-off knee-boots from the mud people of the Pale Marshes; a silvered weather suit from the prairie folk of Old America; patched with slivers of rough sharkskin and festooned with the bright neon ident-patches of the urbanite cliques of Nouveau-Paris; the collar altered and extended, bearing the golden honeybee of Japan. Most unusual of all was her hat. It was one the tall lozenge-shaped helmet-hats of the Tethnolhokin Nomads, complete with big wind goggles and ear clamps. Just as Gayane didn’t share the Tethnolhokin’s ice-pale skin, (hers was the rich, browned tan of the traveller) her hat didn’t share the traditional khaki usually associated with the garment; instead it was a brisk and garish cyan that faded towards white near the peak. She caught Al’s perplexed stare locked on her headwear.

“You like my hat? It was gift to Gayane Al-Taftazânî from Xoxopehualoc Zein von Mortuda. Now it is gift to Almund Skeete.” Gayane said, removing her hat. Long rich curls of sandy blonde hair spilled out from beneath it. With a distinct lack of ceremony she plonked it square onto Al’s head. She brushed her hair away from her face and stared once again at Al, chewing at the corner of her lip. “Lose headphones, they make you look like th’n’lk-chuu’p.”Al cocked an eyebrow at this. “Does not translate” Gayane offered in way of an explanation “Very rude.” 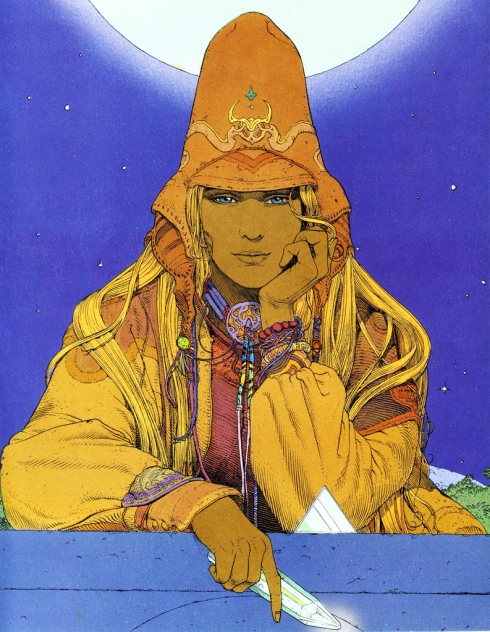 Al laughed. He couldn’t remember the last time he’d laughed. Sure this travelling lark was inspiring and educational and all that other shit that despondent youths tell themselves before setting out to see the galaxy. But in truth it involved a lot of long, uncomfortable nights; alone, cold and sleeping on very hard surfaces surrounded by people you didn’t know, didn’t trust and sometimes rightfully suspected would gut you from arse to ear just to steal your toothbrush. Al liked his toothbrush, it served its designed purpose admirably. It had also cost him fifteen old dollars from a toothless man operating out of a junk skiff in Cambodia. Al had been in a bind, he’d needed a toothbrush, he’d been a captive market, it’d been worth every penny. Snapping out of his drifting reverie he focused his attention back on the first soul who had willingly decided to speak to him without cause for little over a year: Gayane, with her mad emerald eyes and easy smile.

“Gayane” Al continued “Where you heading from here?

“Gayane knows many things. Where I am going? That… That is not one of those things.” She replied, gently taping her cheek in thought. “Will know when I get there.”

“So you’re a drifter? Living life on the open road, going which ever way the wind takes you?” asked Al, as he fumbled about in his pockets. “Couldn’t do that myself.” He continued, drawing a small metal box from his pocket, slowly opening it and taking a deep huff of caffeine snuff through his nostrils. “Always got to have a plan, always got to have a goal. If I was just drifting, all rudderless, I’d go mad.”

“No, no, no. I am not drifter. Drifters have no purpose. Gayane looks for signs, she feels the currents in the skien of the world, I sink myself into the feel of a place. I keep wandering until I find right place, then I know in which direction to head next.”

“Sounds a bit wishy-washy to me.” Replied Al. Gayane playfully slapped him on the back of the head, knocking his new hat over his eyes.

“You do not see, this is why you do not understand.” She said with a smile “One day, maybe you do. Maybe. Gayane promises nothing.” As she spoke she lifted a box onto her lap. On each of its sides was a large, white star. “I am looking for the right person to give this box too, have not found them yet. I feel I will find them soon though. Soon.” Gayane nodded to her self. “But enough of Gayane’s things. Where does the esteemed Almund head to next? You being the man with a plan.”

“From here I take the connecting bus out to Mid-Thresson, sub-orbital skip to the Westpoint Seas in time for the big carnival and then one of the lazy-cruises out to the Antiloc Islands. Then it’s off planet back to the homeworld. Sweet blesséd Earth.”

“Antiloc Islands…” Gayane mused. “Its antipode is Talon-vree. Big city, many things, many people.” She leaned over and kissed Al gently on the cheek. “Gayane must go to Talon-vree. You have been of much helps Mister Skeete. You have my thanks.” With that Gayane stood up, gathered her things and headed out into the orange wastes at a brisk pace. Al sat immobile and watched her walk away, as much stunned by her surprise display of affection as her sudden departure.

“Will I ever see you again?” he shouted out to her.

“I will see you at New Year Mister Almund Skeete” Gayane shouted back.

“But how will you find me?”

“Gayane is resourceful, she will find you.”