The Rogue Verbumancer – Jun 2013 The Tower on the Hill

A single blue light flashed on the dashboard. Transmission incoming/outgoing. A moment later we slipped through the translucent, crystal blue surface of the security field. Its surface unblemished by our passing, no ripples, no holes, no distortions. It just let us through. The ostentatious frivolities of the standard urban security fields had no place here.

“You are now entering a reservation area” intoned the voice of the flier with melodic androgyny. “This vehicle will now land.”

Wet set down on a small landing pad about half a klom inside the reservation. It was little more than a ten meter wide circle of reinforced concrete. A single grey marring of an endless sea of green. The canopy of the flier hissed open. I stepped over the lip of the passenger compartment, bag in hand, and hopped from the running boards to the concrete surface below. The canopy closed behind me and the flier gave a soft hum before lapsing into standby mode; the electronic equivalent of the Old World felines curling up and going to sleep.

I took a deep breath, filling my lungs with air untainted by the sweat of heavy industry, the acrid bite of municipal pacification compounds or the ever present tang of recreational sex pheromones. My neural net wasn’t picking up any chatter. No signals of any sort. No radio, no microwave, no IR, not even the hint of an interstellar tight-beam. My eyes didn’t even pick up any of the usual EM flux of urban living, only the ghosts and echoes left by the sleeping flier. I stood at the edge of the last unspoilt wilderness. A preserve shut off from the rest of the galactic cluster. I stood at the edge of the Wildlands.

I spent weeks hiking my way into the interior. Subsisting on compacted discs of dehydrated nutrient paste and tiny nuggets of vitamin compounds, the enhanced membranes of my respiratory system extracting water from the air as I breathed. In my travels I hadn’t seen another living soul, nor a trace of anyone having been here before. There were no real paths, only the loose gravel or compacted dirt of trails worn into existence by the passage of time and beasts. I had been following one such trail through the nestling rises and swells of steep sloped hills when I happened upon something remarkable. Rounding the curve of a hill I beheld the vista of the tallest mount of the region. This in of itself would have been impressive enough to one who had spent a lifetime in the steel jungles of the mega-cities, but on the peak of this particular hill stood something. Silhouetted as it was I couldn’t quite make it out. I squinted, dialling up the polarisers in my eyes and tweaking the optical brightness levels until I reached a level of clarity.

It was a tower. 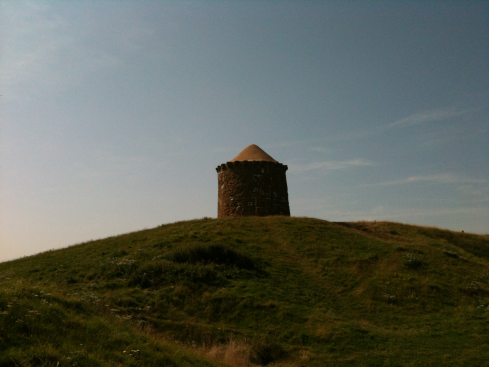 I had always been told that there were no buildings in the Wildlands. No mark left by human hands. The fact that this tower was here was an impossibility. But it was not a building in the sense that I knew the word. It was squat, seeming scarcely two stories tall. Its walls made of weather-beaten stones and its roof an almost offensively asymmetrically cone of sun baked clay.

I had no doubt in my mind that it was old. It had to be old. I didn’t even know how far back into the mists of time you would have to wade before you would find a period where people still built things from stone. These days the notion was barely conceivable. It must be impossibly old.

I could see no doors or windows, or any other means by which to access it. Nor could I fathom its purpose. I couldn’t bring myself to look away from the tower. I stood there, eyes locked upon it and under its spell. The tower drew the eye. Your eyes seemed to simply slide off anything else in the vicinity, always being inexorably drawn back to its stony facade. Everything around it lost focus and faded into the background, colours muted and shapes fuzzed. Until all that there was, was the tower. It’s presence, its very existence, consumed me. The mere act of it being there, on the hill, weighed down upon my consciousness. Even though it was not alive, it was just a crude and ancient edifice, it had a presence. I was swallowed by the feeling of its immutability. The presence it exuded made me feel like I was just a blip on the radar, a blemish in the skien of existence. I knew instinctively that this thing, this tower, would out last me; it would outlast the Wildlands and everything else around it. It would out last the planet and it would outlast humanity. And when the universe finally grow cold and the stars winked out, I knew that it would still be here. Standing on the precipice of nothing, overlooking a dead void. Standing proud and tall; ancient and forever. This was not a thing of this world or wrought by the hands of humans living or dead. I suspected that the tower had always been, just as it always would be and that it had simply let the land and the world grow and mould itself around it. All but itself was merely incidental.