The Rogue Verbumancer – Feb 2015 End of the Line

The skull was heavy. Far heavier than a skull had any right to be. It rested in Jala’s lap, staring up at her with eyes of carnelian and jade. Those stone eyes held about them a hungry menace, something which lingered and stalked about you. It demanded your attention; your reverence. And the moment it had it, it started to whisper in your ear. Honey sweet words, comforting promises. It made you feel wanted and needed. It warmed and massaged your heart. It gave you a sense of vitality and vigour, snaking its tendrils down into your soul and wrapping themselves around your heart. So you did what it asked of you, you fulfilled its whims and demands, if only so it wouldn’t take its love away. Even long after you had realised how terrible and dark its wishes and whims were, even after you realised it cared nothing for you, that it was using you. By that point you didn’t care that it had made a slave of you.

The skull had a presence about it, perhaps that was why it felt so heavy.

Jala beheld its eyes and its wide, unceasing grin. She heard its whispers and promises; its cloying and its cooing. With a sigh she stuffed it back into a coarse burlap sack and kicked it underneath the boat’s bench. The skull was such a fucking bore. It had nothing to offer her. 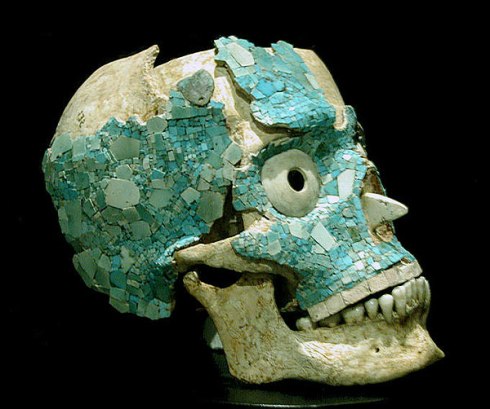 The oars sliced into the thick, murky waters, each stroke stirring the stagnant depths and caking the blades with a foul-smelling, black silt. The sun had long since begun to dip below the horizon, its coming departure drawing out swarms of small, black flies. Their fluid, undulating mass filled the air with a low drone that spoke as echoes of a cruel and primal mire that had not yet had the decency to die or be tamed. The flies feasted and gorged their small forms on the exposed skin of the ferryman and her passenger. Their proboscises piercing and puncturing the skin like a thousand minute knives, leaving fat, itching welts; a faint reminder that this was not a place for people. This was the third of the nine swamps of Trolah; The Weeping Fever; the jewel in the fetid crown. The only swamp which fed into the Nightmare Mangroves of the Thrice Killed King. The King whose strange and fell arts had conspired down the centuries, even in the wake of his third and final death. Though he might be at last expelled into the cold oblivion of death, the whiles and mischiefs of the priests who knelt at his altar still blighted the world. Like their master, their influence and malice reaching back from even beyond the veil of death.

The skull in Jala’s sack belonged to one such priest, its bleached and pitted bone brimming with enchantment and necromancy. It had drawn Jala down a long and ragged trail. First a ducal summons, courtesy of Lord Meles of Natrix Hall; his lament of “something rotten” in tumbledown warrens of his city; the feel of the fat, grey-gold coin he placed into Jala’s hand; the embossed image of a snake swallowing its own tail, encircling an engraved sword. It felt like mercenary work, crude and undignified, but Jala was not fool enough to prevent pride lining her purse. So she sunk herself into the sombre cold of rain, stone and the dark, tenebrous illusion of civilisation. Haunting the footsteps of glassy-eyed, soul-dead citizens to a dusty garret by the western wall. Jala left the floors red, with a sack in hand. From there she descended into the sweltering mires of the far south, to a realm of wet, biting heat; a place filled with the perfume of rot and the sweet smoke of nightmare; a nadir at once global and personal. Nothing dampens a spirit faster than mile upon mile of fetid bog and the endless variety of creatures trying to eat you in a myriad of different ways.

How far her star had fallen.

There was a time when Jala was steeped in glory. A time when lords and kings would kneel to her. When the mere presence of her hand upon the hilt of a sword was enough to make warlords and their armies quake with fear. She had slain the Tyrant Stellastelathororn, she had walked in the secret canyons of the Heldrakai and left with her life and their blessing. She had even set foot upon the Isle of Forgotten Fire and walked through the ruined halls of the Manse of Radgerock. There was no foe beyond her, even the 1,000 Deaths from beyond the Veil Shadow had quailed before her.

But that was then.

Time had not changed Jala as much as it had changed everyone else. Few now remembered her deeds and of those, even fewer believed what they heard. So her she was: In a patched and leaky swamp boat, vanquishing two-bit shades, for third-rate nobles. 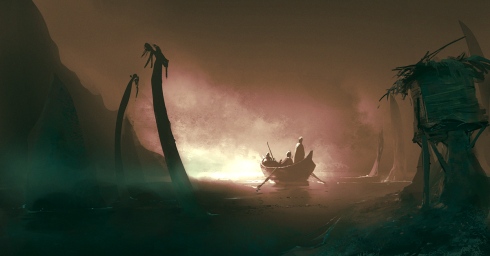 The prow of the boat breached through the luminescent mist rising from the swamp waters and gently nudged itself up onto a peaty shoreline.

“This is a far as I take you Ma’am.” Said the ferryman “Ain’t enough gold in the world to convince me to go no further.”

Jala shouldered her meagre belongings and pulled the sack holding the priest’s skull from beneath the boat’s bench. She vaulted over the side of the boat and into the thick, sucking muck of the shore.

“Gods go with you, Ma’am.” Said the ferryman, her voice thick with fear.

Jala turned back to the boat and its pilot.

“I am of the frozen tundra of the godless north, beyond the pillars of red iron. No gods walk there, and even in the southlands they flee before my footsteps. But even if they didn’t? They would not follow me here. This is a forsaken place.” Replied Jala. “A forsaken place for a forsaken thing.” She added with a mutter.

“I don’t know if you’re talking about that wretched skull or yersel’.” The ferryman snorted with laughter. “Either way, I best be off. This place gives me the screamin’ hrobatz.”

She shunted the boat off the bank and back into the murky waters. The ferryman bent her back, dipped her oars and began to glide away. Just as her boat was swallowed by the swamp-mist she yelled back at Jala.

“I’ll be back in two days time, assuming yer still alive.” And with that she was gone.

With only the swarms of biting insects for company Jala trudged her way up the bank. She wanted to feel strong and determined, but in reality she just felt tired, so very tired; Weighed down by life; Burdened by a duty she could not understand; haunted by a destiny she could not describe.

Jala passed the ruined stone tower that marked the edge of the third swamp of Trolah. It rose from the water like a broken, pestilent tooth. Whether riven by time, the wet bog mists, or a lingering, voiceless evil; it made no difference. With her head held high, Jala walked freely and willingly into the Nightmare Mangroves of the Thrice Killed King, a place where no sane or living soul sets foot. Here she would put the skull to rest; out of the reach of man; in the only place its powers could never muster the strength to cajole the wills of mortal folk. A place where all magic had been scoured clean by the tumultuous death of its King.

An ordinary warrior would be scared, wracked with fear at the prospect of facing an assortment of blood wraiths, soul leeches, hell sprites and lingering spectres of malice. But Jala wasn’t afraid, it was looking like it was going to be a pretty mundane day by her standards.